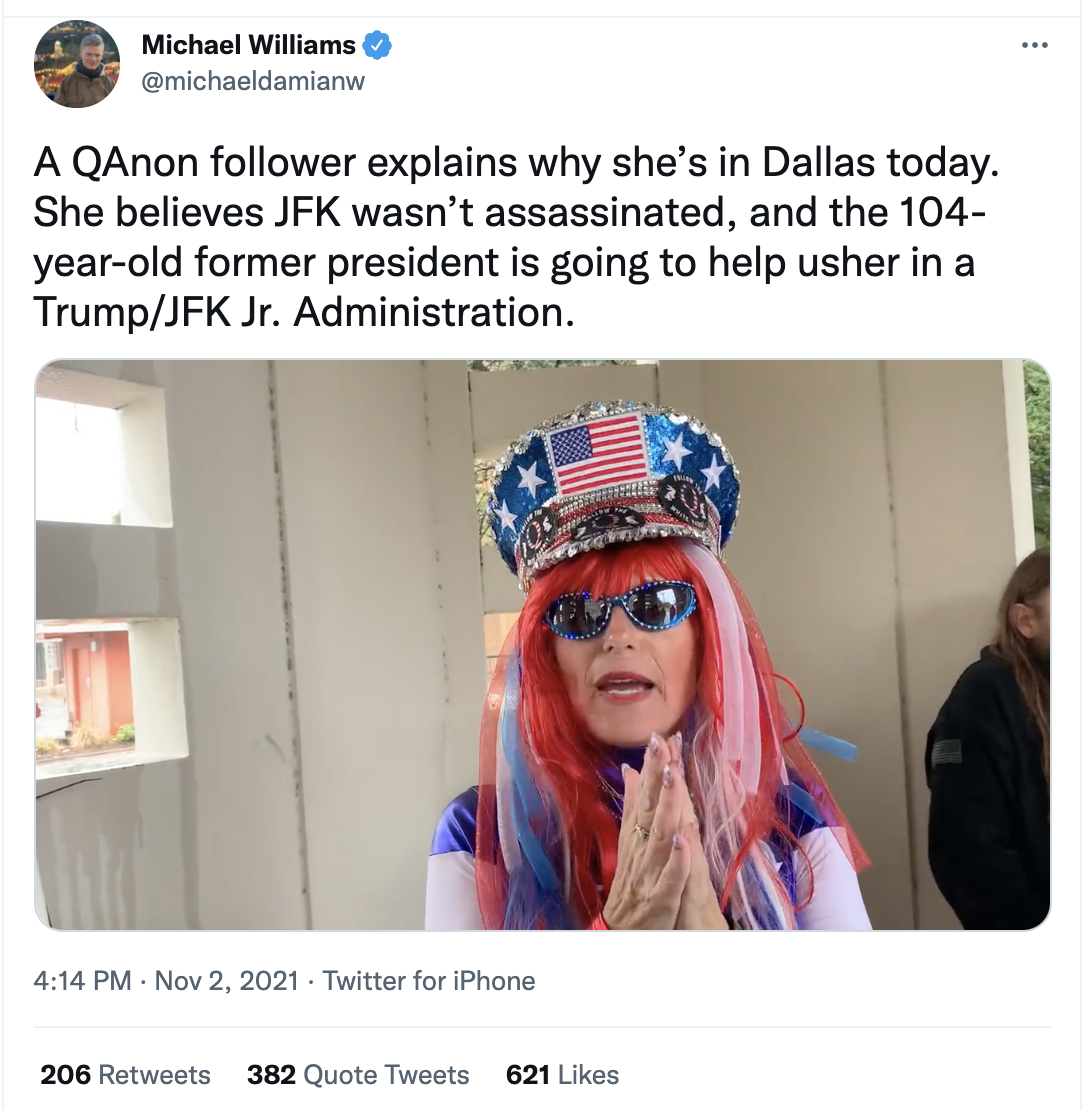 Background Information
DALLAS (KXAN) — As state and local elections continue into the evening on Nov. 2 across Texas, QAnon conspiracy theorists gathered in downtown Dallas to await what they say will be the return of John F. Kennedy, Jr., who died in 1999.

The gathering began at Dealey Plaza Monday night, The Dallas Morning News reports. The return of JFK Jr. in the city and spot where his father died in 1963 is meant to begin the reinstatement of former Pres. Donald Trump, according to several QAnon-affiliated social media accounts.

Slain teen’s family reconciles with friend who killed their son, cuts deal to keep him out of prison
Rolling Stone explains a popular QAnon influencer on Telegram repeated to their over 250,000 followers debunked claims of widespread fraud resulting in the election of Pres. Joe Biden. The influencer theorizes that not only will JKF Jr., who died in a plane crash at the age of 38, return, but that one QAnon theory will be proven true: that every U.S. president and law since 1871 is illegitimate.

The “1871” theory relates to the passage of the District of Columbia Organic Act of 1871, which theorists believe transitioned the U.S. into a corporation. “The theory is based on a false interpretation of the Organic Act,” writes BBC’s Shayan Sardarizadeh. “[The act] merely turned the District of Columbia into a municipal corporation, better known as a local governing body, and has no relation to a president or the US as a whole.”


This “loophole” is believed by supporters to make Trump’s reinstatement possible — after which he would make JFK Jr. (who’s believed to have been in hiding) his vice-president before stepping down, making Kennedy Jr. president. The influencer, RS reports, says once Trump steps down, he will become “1 of 7 new Kings. Most likely the King of Kings.”
Technique Used
Respond to Audience Needs
This is propaganda because
True believers feel a strong sense of loyalty and feelings of belonging. At a time of uncertainty, continued belief in prophesies are comforting,